on arriving and departing international flights, a move that airport authorities claim will speed up customs, while privacy advocates worry about the lack of formal rules in place for the data from the scans. 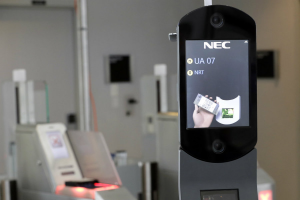 Florida’s busiest airport will be the first in the nation to require a face scan of passengers on all arriving and departing international flights, officials said Thursday, a move that pleases airport executives but worries privacy advocates.

Officials at Orlando International Airport said the expansion of face scans would speed up the time it takes for passengers to go through customs.

“It’s almost like Christmas in June for me,” said Phil Brown, chief executive of the Greater Orlando Aviation Authority. “The process of going into and out of Orlando is going to be greatly enhanced.”

But some privacy advocates say there are no formal rules in place for handling data gleaned from the scans, nor formal guidelines on what should happen if a passenger is wrongly prevented from boarding.

The image from the face scan is compared to a Department of Homeland Security biometric database that has passport images of people who should be on the flight in order to verify the traveler’s identity. The images are held in the database for 14 days before being deleted, said John Wagner, an official with US Customs and Border Protection.

The face scan expansion is costing the Orlando airport authority $4 million. The program should be rolled out at other airports in other US cities in the next year, Mr. Wagner said.

“We’re comparing you against a photograph you’ve given the US government for the purposes of travel,” Wagner said. “You know your picture is being taken. You’re standing in front of a camera. There’s nothing subversive about this, and we’re only comparing you against your passport photo.”

US citizens at these airports can opt out, but the agency “doesn’t seem to be doing an adequate job letting Americans know they can opt out,” said Harrison Rudolph, an associate at the Center on Privacy & Technology at the Georgetown University Law Center.

The Orlando announcement marks a step up in the scope of the face scan program, Mr. Rudolph said.

“We’re not talking about one gate,” he said. “We’re talking about every international departure gate, which is a huge expansion of the number of people who will be scanned. Errors tend to go up as uses go up.”

“It was fine, efficient, very fast,” said Katrina Poulsen, a Denmark resident who arrived in Orlando on a flight from London.

Andrea Nabarria, who arrived on the same flight, said he understands the concerns about privacy but that passengers may have to give up something in exchange for beefed up security.

“At least that’s what we’re told,” said Mr. Nabarria, an Italian who is a resident of Denmark.

Wagner said the agency hasn’t seen discrepancies based on race or gender using face scans at the other airports.

Two US senators last month sent a letter to the Department of Homeland Security, which is home to the border protection agency, urging that formal rules be implemented before the program is expanded.

“It will also ensure a full vetting of this potentially sweeping program that could impact every American leaving the country by the airport,” said the letter from US Sens. Ed Markey (D) of Mass. and Mike Lee (R) of Utah.

This story was reported by The Associated Press.