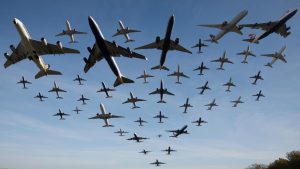 (CNN) — A century after it opened as a simple grass runway in a village west of London, Heathrow could be transformed into the world’s biggest airport following a controversial decision by British lawmakers.
Construction of a third runway — one which would extend over the country’s busiest freeway — was approved in a parliamentary vote that followed decades of debate over how to expand the UK’s capacity for air traffic.
Under the proposal, passenger capacity at Heathrow could jump from nearly 80 million passengers per year to 110 million by 2030, making it, by current statistics, the world’s biggest in terms of traffic.
As well as boosting Heathrow’s status as an aviation hub and making it easier for visitors to explore the UK, it’s hoped the move will counter any economic fallout from the country’s “Brexit” from the European Union.
But the strong resistance to Heathrow’s expansion is likely to continue beyond the vote.
Pressure groups have long claimed that increasing the airport’s size and bringing in more air traffic over a heavily populated area will adversely impact those living nearby and irreparably hurt the environment. Hundreds of homes would be destroyed to facilitate the expansion.
source : edition.cnn
Subscribe

I don’t believe that airports should expand indefinitely, and not on taxpayers’ money backed by politicians whose motivation is certainly not clear. See the proposal for the new project in uae.