The new system accurately captures biometric information from a person’s fingers by means of a 3D image via motion detection. 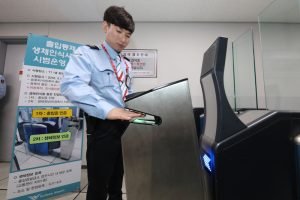 “I will review the pilot operation results of the (new systems) and expand it to the entire (airport) by 2020,” said Chung Il-Young, president of IIAC. “We will also consider introducing it to passenger areas in future”. President Chung also pledged to make Incheon Airport “clean, convenient and safe with zero defects”.

The recent implementation of the new security systems is part of Incheon Airport’s modernisation program to maintain international competitiveness and upholds its image as a world-class airport. The IIAC has sought to achieve this via investments in enhancing and expanding airport infrastructure, participating in international research partnerships, as well as improving customer service and airport security by installing new hardware. Robots deployed by LG are currently being used at Incheon Airport to guide travellers as well as maintain airport cleanliness;  last month, “Drop&Fly” self-service bag drop units were also deployed at Incheon Airport’s Terminal 2, making baggage drop-off more convenient for travellers and baggage handling more accurate and secure.

Incheon International Airport has ranked consistently within the top 10 airports the world, according to Skytrax. The airport’s range of amenities such as a golf course, spa, and private lounges and excellence in customer service has received much international praise, and the IIAC emphasises on improving the customer experience as part of its ongoing airport modernisation initiatives.

Still, the IIAC’s emphasis on improving hardware and infrastructure does not address other pressing issues. In 2016, a Chinese couple and 25-year old Vietnamese man evaded Korean immigration and entered the country illegally; similarly in April this year, a sex offender identified as Shin managed to slip past airport security and was only by Vietnamese law enforcement personnel after his plane landed in Ho Chi Minh City, Vietnam. In the dual incidents of 2016, the Chinese couple allegedly got past multiple security gates in a mere 14 minutes; an alarm had gone off when the Vietnamese man forced his way through an automated gate during peak morning hours, but it had gone unnoticed by duty personnel at the time. Experts have highlighted the lack of strong inter-agency coordination, and chronic understaffing of security personnel resulting in undermanned security systems.