joining a handful of other airports around the world testing how they might benefit from the system. 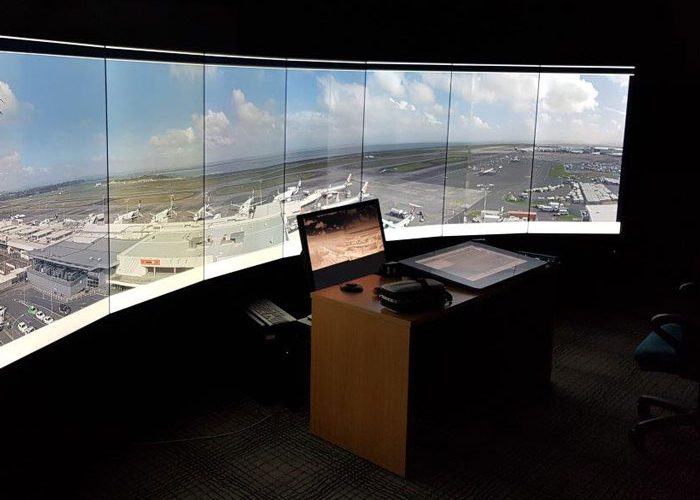 SQUARE EYES: Digital towers present controllers with a huge amount of information and panoramic views of an airfield in more detail than is possible to see with the human eye

A prototype digital air traffic control is being trialled at Auckland International Airport. Airways New Zealand, the county’s only air navigation service provider, announced today that it had partnered with technology firm Frequentis to engineer the technology.

The demonstration prototype will be used to assess how digital towers could increase aviation safety and extend hours of air services in more regional locations, enhance resilience and improve traffic flows in bad weather.

“For example, cameras can automatically zoom in and track objects that are fast moving or otherwise hard to see, such as birds which are a serious hazard to aircraft. In low light or bad weather, infrared would provide controllers with heightened visibility.”
Digital towers present controllers with a huge amount of information and panoramic views of an airfield in more detail than is possible to see with the human eye.
This vision is enhanced with surveillance sensors and microphones. Augmented reality overlays mean controllers will be able to see additional flight data collected via radar like aircraft speed, separation between aircraft and airfield information.

“Digital towers are one of the intelligent transport technologies we are looking at to modernise our air traffic network and ensure New Zealand gets the most benefit out of an increasingly complex and busy airspace,” Ms Lamb added. “In future digital towers could support greater air connectivity, by giving us the option to extend services in areas of New Zealand where the costs of building or servicing a physical tower are currently not cost effective.”

The most recent estimates suggest that demand for air transport in New Zealand will increase by an average of 4.3 per cent each year over the next 20 years. And, with the arrival of UAVs, rockets and other new entrants into New Zealand skies, the demand for air traffic management services is increasing.
The prototype tower is not being used to manage live traffic. In the first instance Airways is exploring digital towers to see how the technology could be used as a contingency option to back-up to physical towers.
Digital tower technology is gaining a foothold internationally. Systems are currently being tested at Changi and London City Airports, and rolled out across Sweden and Norway.