It’s 2017. According to SITA, 98 percent of airline passengers fly with at least one mobile device.

It’s amazing that so many passengers still prefer to the face-to-face experience at airports. It’s a lot slower than self-service, and often less effective.

Airline passengers who use mobile phones or self-service kiosks to handle simple tasks at airports, such as checking in for flights or dropping off checked luggage, are happier than customers who prefer face-to-face interactions, according to a new survey from SITA, a company that provides technology solutions to carriers.

Self-service options are almost always faster for travelers, and in some cases, passengers using mobile apps may access information easier than airport employees. An app, for example, might tell a passenger a flight is delayed before an agent knows it. And a good app allows passengers on delayed or canceled flights to rebook themselves quickly.

Sometimes apps even offer more options than airport agent would.

“Passengers are not just carrying their devices — they are happy to use them throughout the journey,” SITA said in its report.

Meanwhile, more than four in five customers still speak to an agent to check bags, even though many airlines have self-service bag drops.

In its annual survey, SITA asked questions about air travel to more than 7,000 passengers flying full-service and low-cost airlines from 17 countries in the Americas, Asia, Europe, the Middle East and Africa. To participate, a traveler had to fly at least once in the past three months.

Over time, SITA predicts more customers will prefer self-service, not only for check-in and baggage tagging, but also for other elements, such boarding, and even post-arrival baggage tracking. According to SITA, travelers have the devices they need to handle most tasks themselves, with 98 percent carrying at least one mobile device, and 70 percent carrying two.

Then again, mobile may not be the future. SITA also expects more passengers will embrace biometrics so they can move even faster through airports and passport control. It found 57 percent of passengers would use a biometric token for their next flight, assuming it helped them move faster from the airport lobby to the gate. Still, SITA noted that about one third of passengers have privacy concerns about biometric technology, which includes facial scans, fingerprints and iris scans.

SITA has been trying to sell airlines and airports on biometric token technology that makes most airport document checks unnecessary. So far, the service has few customers, but in one trial, in Brisbane, Australia, SITA has been using facial recognition technology to speed the travel journey. SITA is also helping JetBlue with a biometrics trial in Boston that will allow some customers to board without showing a boarding pass or a passport.

Here are some highlights from the survey. 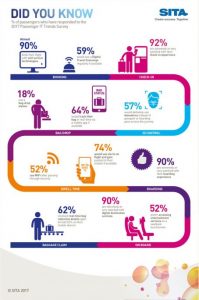 and get the full support from article’s source : https://tinyurl.com/ybs9ss8f