7 Humanoid Robots Which Were Made In India, And Their Success Stories 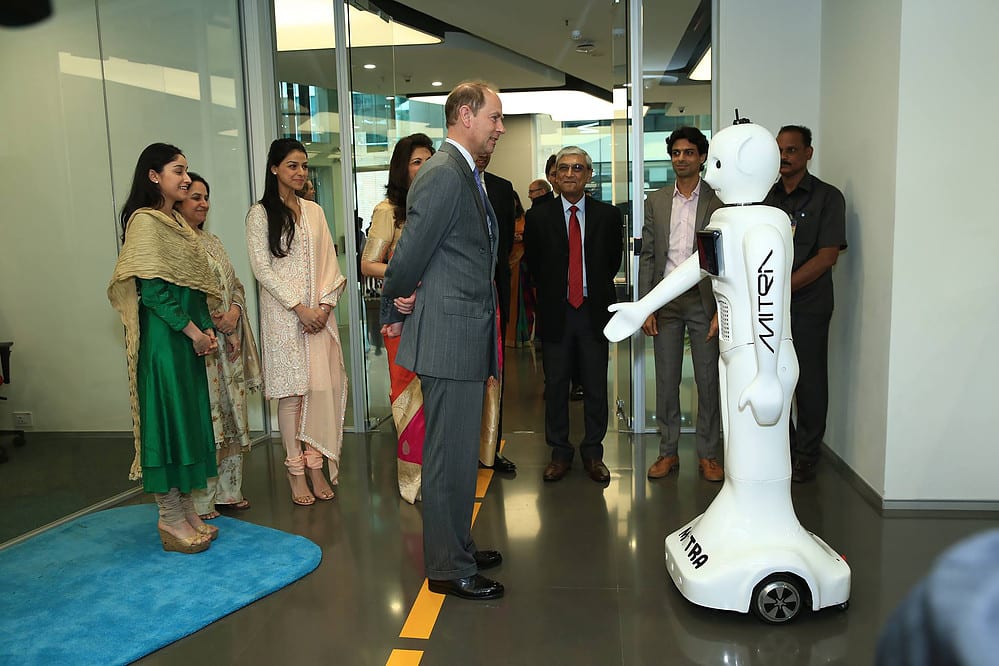 Humanoids robots have been gaining popularity in India for quite some time now. Although the country is still catching up with the developments in artificial intelligence and robotics as compared to others, Indian startups, as well as the government, are working at a rapid pace to integrate new age technologies. According to an IFR research, robot sales in India increased by 27 percent to a new peak of 2,627 units in India — almost the same as in Thailand. Another survey claims that India ranks third in implementing robotic automation.

Let us take a look at a few noteworthy humanoid robots that are designed and developed in India:

Manav is India’s first 3D-printed humanoid robot. The two kilo, two-feet tall robot has an inbuilt vision and sound processing capability which allows it to walk, talk and dance — just in response to human commands.

Developed by Delhi’s A-SET Training and Research Institute, the humanoid robot is primarily meant for research purposes and is made available to research institutes which offer robotics as a subject of study.

Manav can also perform activities like push-ups, headstands and can also play football. It uses an open-source code so that it can also be taught to learn and respond like a human child. It also has WiFi and Bluetooth connectivity and has a rechargeable lithium polymer battery that can work for an hour with a single full charge. The parts of Manav are all made in India, the outer frame of the robot is made of plastic and was 3D printed from A-SET’s own 3D printing venue, Buildkart Retail. 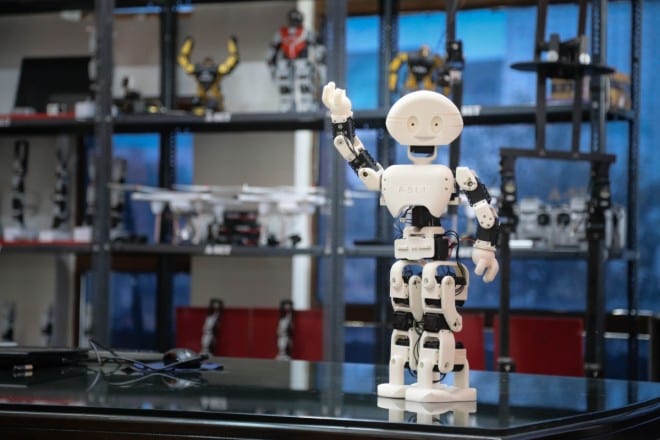 The first indigenously built humanoid robot is capable of interacting with humans smartly. The five feet-tall humanoid robot is made of fibreglass and is programmed to greet customers using contextual help, autonomous navigation and facial and speech recognition. It also has a touchscreen on its chest which can be used to interact where speech is not possible. It can work for eight hours on a single charge. It can also understand multiple languages.

The humanoid robot was launched by Prime Minister Narendra Modi and Ivanka Trump, First Daughter and advisor to the President of the United States Donald Trump, at the Global Entrepreneurship Summit (GES) conference last year.

Developed by a Bengaluru-based robotics startup Invento Robotics, the robot can be found floating in the corridors of the Canara Bank and PVR Cinemas in Bengaluru, chatting with the customers and making them feel welcome.

According to the robot’s official website, the robot is as handy in the service sector as it is as a host. In fact, one can rent the robot for any party. Depending on the requirement, the startup customises the humanoids accordingly.

Reportedly, Mitra was also showcased at an annual technology conference Slush 17 in Helsinki, Finland. During the event, the robot not only caught the attention of the audience but also received opportunities for partnership with a European firm.

Hyderabad-based AI and ML startup H-Bots Robotics has developed a police robot to assist in handling the law, order, and traffic management. The life-sized robot, which was deployed last year in Hyderabad, is equipped with cameras and an array of different sensors like ultrasonic, proximity and temperature sensors. The robot is designed to protect and secure places like offices, malls, airports, signal posts and other public spaces and can take care of security if deployed autonomously. Reportedly, the Robocop can diffuse bombs too. The beta version robot is made in India using all Indian components. 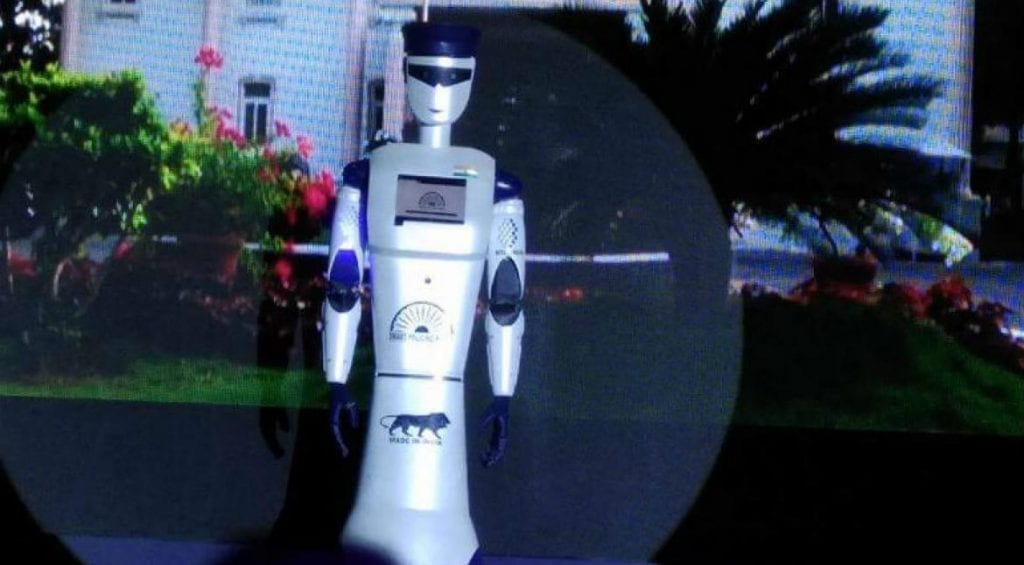 Passengers visiting Bengaluru airport may soon be greeted by a special robot assistant. Built to suit the needs of the Kempegowda International Airport, the little bot assistant, named KEMPA, will answers queries of confused passengers in English as well as Kannada.

The humanoid is built on AI by a Bengaluru-based startup Sirena Technologies. The advanced humanoid is completely designed and manufactured in Bengaluru.

KEMPA is programmed to provide flight and check-in details and other information about flights. While the bot is still being tweaked and is getting ready for the official launch. It also suggests places to visit in the state also engages in casual conversation with passengers. 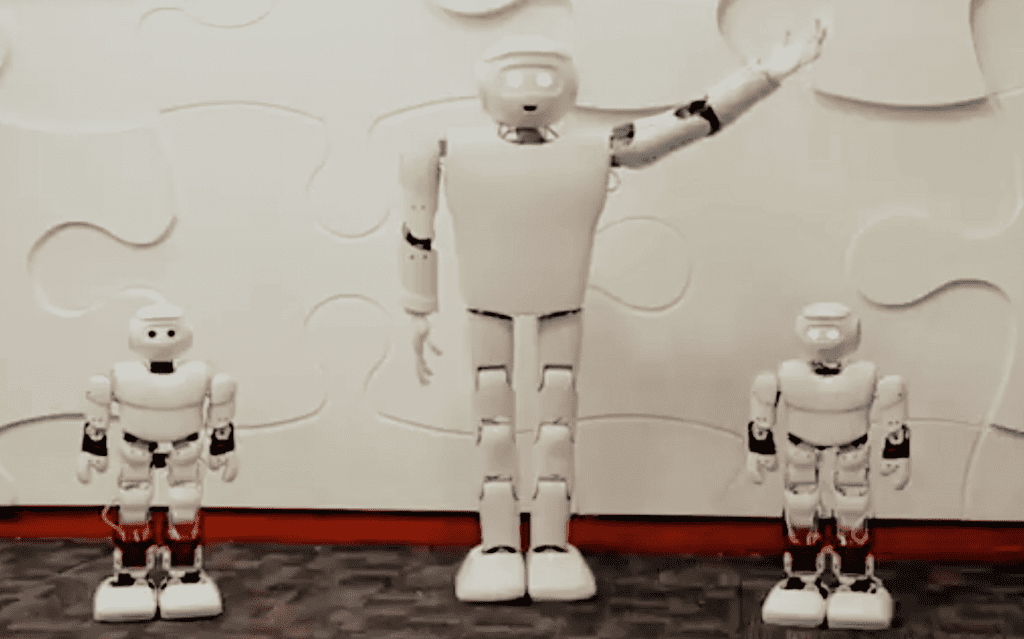 According to a statement released by Vistara, the RADA will be placed at Vistara’s Signature Lounge at Delhi’s Indira Gandhi International Airport’s Terminal 3 from 5 July 2018 to assist customers before they board their flights. It will also help promote Vistara’s product and services with the help of distinct messages recited by the bot.

RADA will be further developed over a period of time in terms of functionality and features for future use cases, after gauging customer feedback. It is conceived, designed and engineered by its team of technology experts and apprentices from Tata Innovation Lab with support from students of reputed institutions.

Built on a chassis of four wheels, RADA can rotate 360 degrees and has three inbuilt cameras for cognitive interaction. Combining these components with an effective voice technology, Vistara has developed the robot to provide a simple solution to cater to the emerging and future trends. 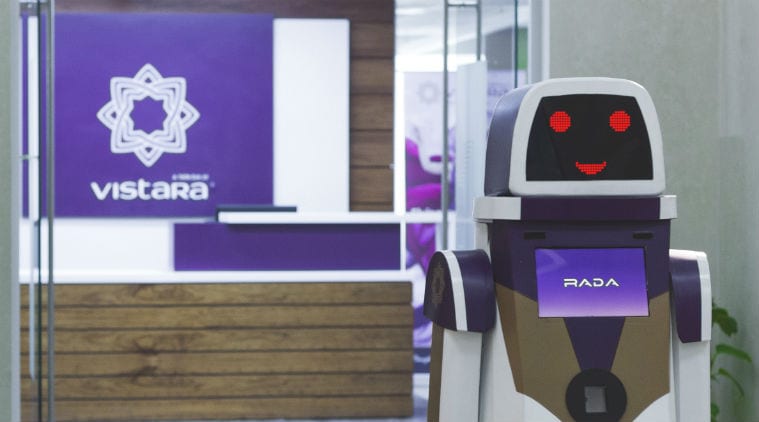 Next time you enter the HDFC Branch, you may be greeted by a shiny white interactive humanoid called IRA (Intelligence Robotics Assistant). HDFC bank first launched IRA 1.0 in its Mumbai branch last year. Recently, it deployed an advanced version of IRA in its Koramangala Branch in Bengaluru.

IRA 2.0 is a blend of the former model and EVA (Electronic Virtual Assistant). It has been trained to answer questions frequently asked by the customers and assist the customers to the correct counter as per their requirements. The humanoid interacts with customers with a voice-based technology. IRA 2.0 has been created by HDFC Bank in collaboration with its technology partner Invento Makerspaces and Sensorforth Technologies. The bank claims that it is the first bank in India to introduce a humanoid for customer service. 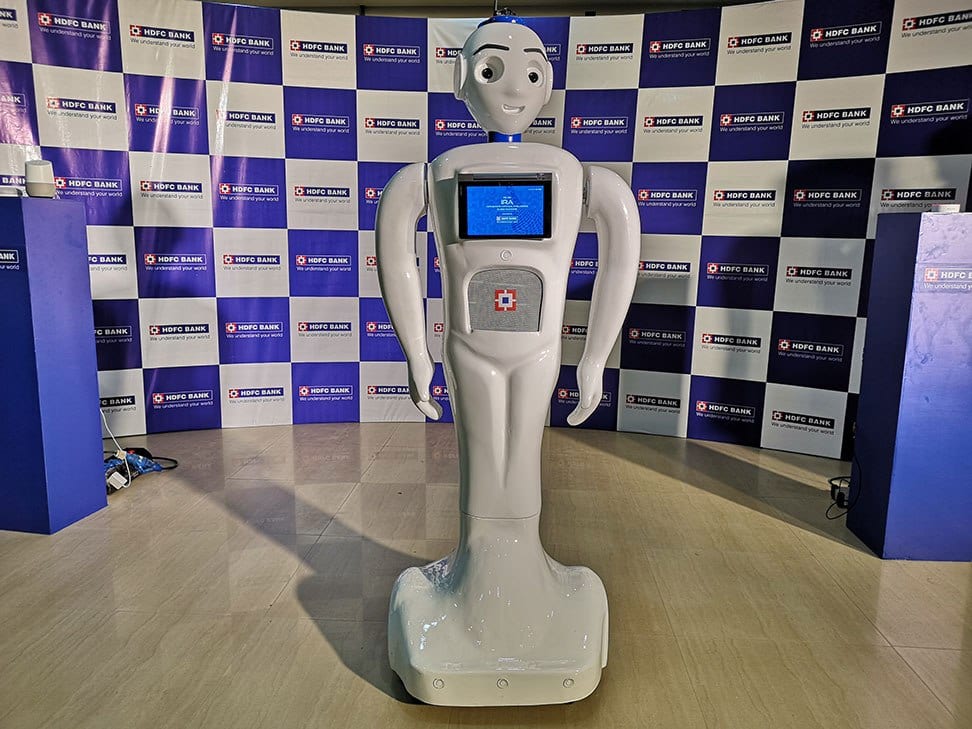 This is reportedly the tallest humanoid robot built in India. Created by researcher Santosh Vasudeo Hulawale, INDRO is an autonomous robot was made inside a house with easily available low-cost material like aluminium, wood, cardboard, plastic etc. According to a research paper, INDRO can be used for lightweight tasks like entertainment, education and a few household works. The autonomous humanoid robot is not fully autonomous and can be controlled both autonomously and manually. It has 31 motors and can perform actions like a human. In addition, it can lift objects weighing up to 2 kilos with its hands. 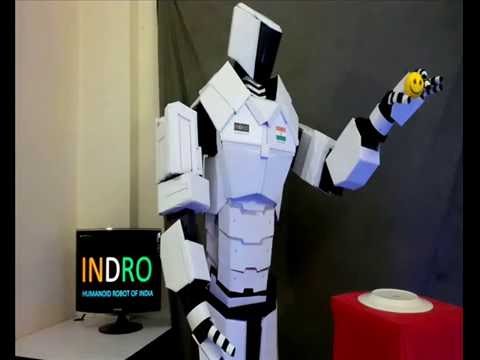 This made-in-India robot is primarily designed to detect and recover Improvised Explosive Devices (IEDs). Developed by Defence Research and Development Organisation (DRDO), the robot was inducted by Indian Army around 2011. Reportedly, 20 Daksh robots are already being used by the Indian Army.

Using its X-ray vision, Daksh can identify a hazardous object and can diffuse it with a jet of water. Daksh is capable of climbing staircase and negotiating cross-country terrains and is capable of towing a suspected vehicle away from a crowded area. Additionally, it can be operated from a distance of 2.5 kilometres and can handle car explosives with its high-calibre shotgun. Reportedly, after it got an upgrade in 2015, it not only became lighter, faster and rugged, but has also been equipped with chemical, biological, radiological and nuclear hazard detection mechanism. The new Daksh is made of aluminium alloy which has reduced the weight and has become three-time faster, compared to the older version, which was made of steel. 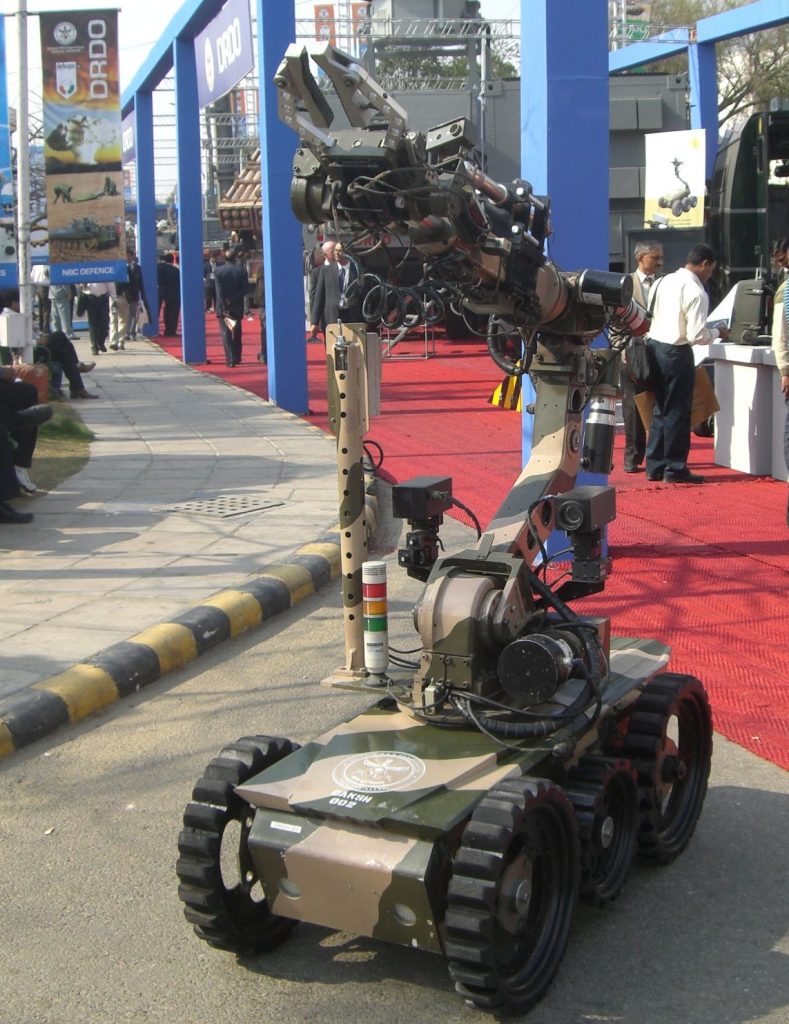 India’s robotics industry is still small when compared with those of South Korea, Japan, US and China. Nonetheless, there are only three robots per 10,000 employees in India. But it is only a matter of time before the country becomes a major player in robotics design and development. India already has many of the basic elements in place to become a robotics industry, including established business, academic research, government support and an increasingly entrepreneurial business community.